Edition 2 of the Galway Radio Club Newsletter has arrived and is well worth a read. It can be downloaded from here.

VOA and BBC World Service announce reductions to their shortwave schedules.
Voice of America press release, 26 Mar 2013: “Voice of America is reducing some of its radio transmissions this weekend and ending shortwave broadcasts to regions where audiences have alternative ways of receiving VOA news and information programs. The transmission reductions allow VOA to comply with budget cuts required by sequestration and to avoid furloughs of staff members. When the new broadcast schedule goes into effect on March 31st, cross-border shortwave and medium wave broadcasts to Albania, Georgia, Iran and Latin America will be curtailed, along with English language broadcasts to the Middle East and Afghanistan. VOA will continue to provide audiences in these regions with up-to-date news and information through a host of other platforms, including radio and TV affiliate stations, direct-to-home satellite, web streaming, mobile sites and social media. The new broadcast schedule calls for reductions in some shortwave and medium wave radio broadcasts in Cantonese, Dari/Pashto, English to Africa, Khmer, Kurdish, Mandarin, Portuguese, Urdu and Vietnamese. Direct radio broadcasts to all of these regions will continue. The transmission reductions are expected to have minimal impact on audience numbers since primary modes of delivery will remain. Shortwave and medium wave broadcasts will continue to regions where they draw substantial audiences, and to countries where other signal delivery is difficult or impossible.”
See VOA transmission schedule, 31 March 2013 through 26 October 2013 (not available at voanews.com). This schedule is for transmissions through IBB-owned shortwave and medium wave transmitters and does not include broadcasts that are through partner stations in target countries.
BBC World Service press release, 25 Mar 2013: “The World Service English global schedule will be simplified with fewer regional variations from Sunday 31 March 2013 and shortwave Arabic broadcasts will cease. The reductions to shortwave services were announced in October 2012 as part of the UK government’s 2010 spending review. BBC World Service on FM and online and on television will not be affected and no language services are closing. Shortwave and medium wave transmissions in English will be reduced to a minimum of 6 hours in total each day. This will generally be two periods of between 2 and 4 hours each, usually at peak listening times in the morning and evening to help minimise disruption. … The estimated loss of listeners to Global English on shortwave will be around 1.5m listeners, equivalent to 1.3% of the total Global News English audience on any platform. BBC Arabic audiences are estimated to reduce by 800,000 as a result of the closure of shortwave broadcasts. In the Arabic speaking world, the World Service broadcasts on a network of FM relays, a 24-hour television channel and the bbcarabic.com website. Shortwave services to Sudan are not affected as the shortwave service is currently the most viable method of broadcasting to this large region.”

This should be active for some time. If not look under past editions.

This is the article posted in Echo Ireland about our special event station during the Volvo Ocean Race 2012 stopover in Galway. Please click on the picture for a large version. 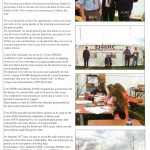 I Know that the time for this test is past but non the less makes for an interesting read.

More digital text via analog shortwave broadcast this weekend. And there is a reason for it. (Updated: success.)

Radio amateurs use several modes to transmit text via shortwave. It occurred to me that text via shortwave might be a workaround where the internet is not available because of disasters, dictators, or other causes.
I have not yet convinced any major international broadcasters to let me test this hypothesis on their (remaining) shortwave transmitters. However, the Netherlands-based Mighty KBC has kindly been allowing me two one-minute segments during their broadcast to North America at 0000 to 0200 UTC on 9450 kHz. This is via leased time on a transmitter in Bulgaria.

Reception of text via shortwave is possible on an inexpensive shortwave radio, even one without single sideband (SSB) capability. The audio is patched into a PC that does not have to be especially powerful. This involves a patch cord from the earphone jack of the radio to the microphone input of the PC. If there is no patch cord, placing the radio’s speaker near the built-in microphone of a laptop might work.

Software for decoding the text should be installed in the PC. There are several available to radio amateurs, including DM780, MixW, and MultiPSK. Especially popular these days is Fldigi. This is available from www.w1hkj.com. While you are there, please also download Flmsg, because it will be needed for this weekend’s test on KBC.

This weekend’s test on KBC will feature the MT63 modes with long interleave. After Fldigi is installed, go to Configure > Modems > MT-63 > check 64-bit (long) interleave, 8-bit extended characters, and Allow manual tuning. Also, go to Configure > Misc > NBEMS > check Open with flmsg and Open in browser and, below that, indicate where your flmsg.exe file is located.

The first KBC text transmission will be around 0130 UTC Sunday (Saturday evening 8:30 pm EST). The MT63-1000 mode with long interleave will be centered at 1000 Hz on the waterfall visible on the software display. PSKR125 will be cenetered at 2200 Hz. Decode one while listening, and decode the other from your recording of the transmission.

The second text transmission will be just before 0200 UTC Sunday (9 pm Saturday EST). This will be MT63-2000 centered at 1500 Hz. This message will be formatted for Flmsg. If all goes well, the shortwave transmitter in Bulgaria will open a new window of Flmsg and then open a new window of your web browser with formatted content, in color no less.

One week after my first text transmissions (11 November) on KBC, Arnie Coro at Radio Havana Cuba began transmitting digital text modes on his Dxers Unlimited program (in English). He might do so again this weekend. The schedule for DXers Unlimited can be found at the World of Radio website (where all times and days are UTC, so those UT Monday transmissions are actually Sunday evening in North America).

More discussion of the concept of digital text via analog shortwave broadcast is in Kim’s December 2012 column (pdf) for the North American Shortwave Association.

Update from Kim: My own reception The Mighty KBC in northern Virginia was lousy, and my decoding efforts were mostly unsuccessful. I was feeling despondent and was ready to declare failure.

Then the emails started coming in…

First, my friend in Oregon, nearly 10,000 km from the Bulgaria transmitter, was able to get 100% copy of the MT63-2000 transmission just before 0200 UTC. And, with the help of the Flmsg software, this popped up in his web browser just after the transmission:

The link, by the way, works. Then, another friend in Springfield, Virginia, not far from where I live, also had perfect copy, with this opening up in his browser…

Another perfect Flmsg image came from Manassas, Virginia. Others, in various locations, reported successful reception of the text.

So we may be on to something. In internet emergencies, shortwave might be able to come to the rescue.

There are six issues of Practical Wireless, earliest August 1964, latest
August 1973, available for download on the Internet Archive. The editor
W.N. Stevens was strongly against pirate radio. The April 1966 issue has
an editorial “Law of the Jungle” ending with advice to the Postmaster
General “Let him no longer tolerate the law of the jungle”.

The February 1967 edition editorial is entitled Troubled Waters and
deals with the prosecutions of Radio 390 and Radio Essex. There is also
a detailed 2 page account of the court cases, particularly 390’s on page
740 and 741 of the same issue. In the Sinclair Radionics advert on page
379 of the August 1964 issue there’s a report that T.F.C, Windsor among
many others are picking up Caroline and Atlanta on their Micro-6 radios
headlined Brings In Pirates! Some excellent reading, in particular some
of the adverts. The magazine also had a column dealing with shortwave
broadcast band radio and in some editions medium wave DXing. The issues
can be downloaded at http://bit.ly/TmOjkX

The press fulminated, the enthusiasts were frustrated, and the radio manufacturers fumed. Despite the fact that Marconi had invented radio before Queen Victoria had celebrated her Diamond Jubilee in 1897, radio in Britain took another 25 years to begin an official service to listeners. But when, on November 14th 1922 the British Broadcasting Company’s station at Marconi House radiated to an awaiting nation “This is 2LO calling” for the first time under the company’s name, it marked the start of the first and most distinguished public-service radio station in the world.

As part of the celebrations to mark nine decades of the BBC, historian Dominic Sandbrook explores the long and involved pre-BBC history of radio in Britain, how Britain’s broadcaster got going and developed into an institution dedicated to entertainment, education and information, discovers why Australian diva Dame Nellie Melba was involved, and how the improbably-named Captain Plugge made his first British commercial broadcast from the roof of Selfridges department store in London. From Marconi to Savoy Hill via an old army hut in Essex, the story of the early radio in Britain.

The August 1 In Living Memory programme on BBC Radio 4 was on Sealand,
the programme preview said:

“In 1966, a former pirate radio broadcaster, Major Paddy Roy Bates,
occupied a disused military platform in the North Sea, and moved his
family aboard. The next year he declared it to be the sovereign
Principality of Sealand, appointing himself Prince Roy, and his wife, a
former fashion model, as Princess Joan. Five decades on, the Bates
family still occupy the platform, having survived the repeated attempts
by the British government to evict them by legal means, and having
fought off attempts by rival groups to seize the platform by force. It’s
a story of coups, counter-coups, guns, petrol bombs, and rival groups of
foreign businessmen. Jolyon Jenkins interviews surviving witnesses to
tell the story of this real life “Passport to Pimlico”.

I found this a fascinating 30 minute documentary, it includes clips of
Roy Bates’s pirate radio station Radio Essex. All In Living Memory
programmes are archived on BBC Iplayer, the Sealand documentary can be
heard at http://bbc.in/OCcpX2